Every muscle in my body is sore from this week of hard work, but especially sore are the ones I use for smiling. When everyone had left the Farmer’s Table last night, we abandoned the dishes, scattered on the table like exhausted revelers in the glow of the garlic chandelier, and slowly strolled down the driveway. This place is more irresistible every time we visit.

The Farmer’s Table is Chelsea’s venture, a monthly dining experience hosted by the farm. There’s a farm tour, a hands-on-experience, and, at last, a three course meal served family style on the patio that showcases the farm’s meat and local, seasonal vegetables. Sean was a guest chef for this event, which constituted his public debut. We all worked for the better part of two days to prepare: Sean and Chelsea created a menu and began cooking well in advance while Jesse and I did the enabling work of dishes and venue preparation.

The lamb ribs had to thaw

The ice cream had to be rolled up and refrozen

The potatoes had to be harvested

On the big day, it rained buckets. While we worked on the tent, there was lightning. the weather man issued a tornado watch, Chelsea made brioche, Sean made a pork-belly slider for a mockup, we all drooled, I decorated the tent, and Jesse built a gutter and awning system not thirty minutes before the kickoff to ensure that no one would get soaked in the rain on his or her walk to the bathroom. We were nervous. Tornado watches are not good news for outdoor dinners.

When the guests arrived, Jesse greeted them and gave them a short tour of the farm, his eyes on the sky. I met them with a basket full of umbrellas, just in case. Each couple or family got a pair of scissors and a basket to cut flowers, and we all met on the front porch to arrange them in mason jars for the table. One family had two small children, and the little girl was tremendously excited that her flowers would decorate the dinner table. That done, Jesse swept the guests off to watch the evening milking, and we had a few minutes to do some last minute prep. I placed the flower arrangements on the table, and it looked beautiful.

When milking was over, the guests made their way to the table and Chelsea and Sean’s big moment was upon them: the first course.

The chefs were nervous, but excited 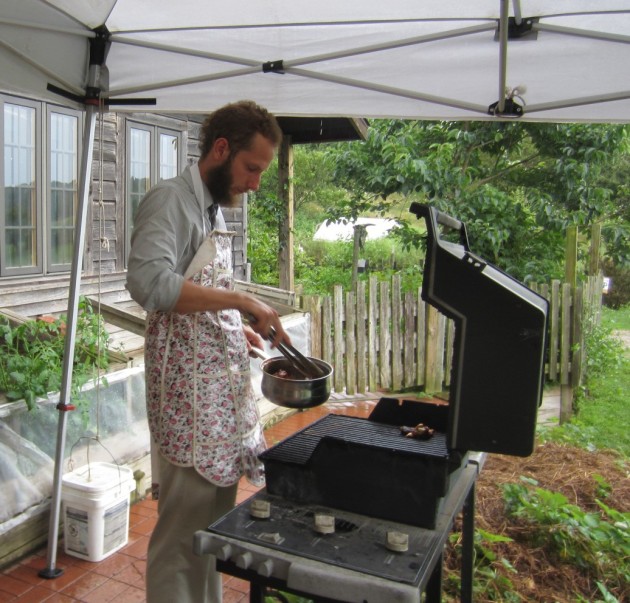 Sean whipped up some sweet wings for the kids. We hadn’t realized just how little they’d be, and he was worried that they wouldn’t like adult fare he and Chelsea had prepared.

Grilled chicken wings tossed with Asian inspired sweet and spicy sauces, served with nasturtium flowers on a bed of kale chips and garnished with shaved onion and fennel.

There’s nothing like eating chicken wings with strangers to break the ice.  After the first breathless rush, everything went smoothly. Jesse and I dined with the guests and chatted about the food or farming while Sean and Chelsea continued at a manic pace in the kitchen, turning out course after beautiful course.

The second course was plated for each individual. 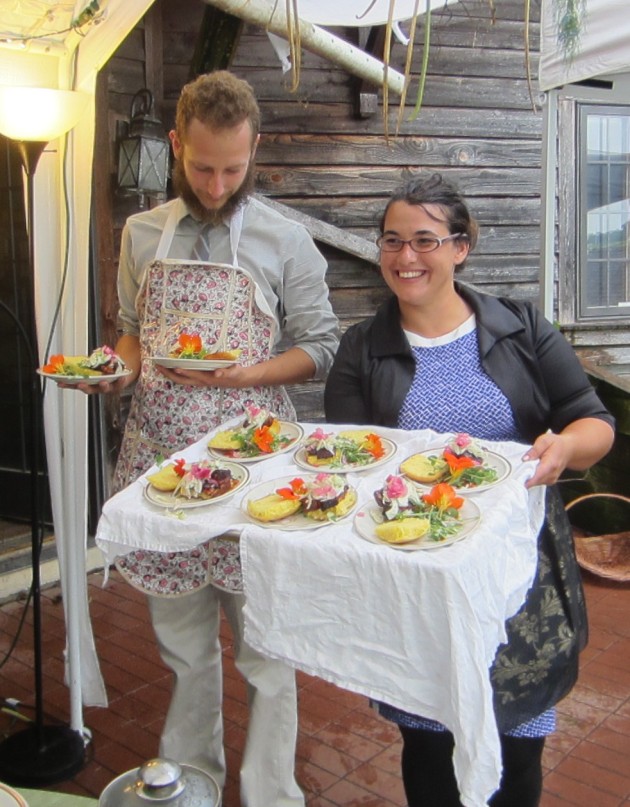 The chefs presented each course to the guests with a description:
“the light, fresh look of our pork belly sliders is deceiving. You’ll find them surprisingly rich.”

Jesse’s expression is fairly representative of the sliders’ reception: blissful, blissful silence at the table.

The main course was slow-roasted lamb ribs with a tangy coriander pomegranate glaze; roasted fennel glazed with local maple syrup; cucumber and tomato salad with feta, all sourced locally; and roasted potato salad with herb dressing. I was too busy consuming my share of the feast to take many pictures, I’m afraid.

The head chef grinning ear to ear with her main course in hand.

After a short break wherein the guests surreptitiously let their belts out a notch (not really, as far as I know, but you get the picture) came dessert. Dessert was mouthwatering to look at and symphonic to taste. It couldn’t have been a more perfect take on the classic ice cream sandwich.
“Did you make the ice cream here?” on woman asked.
“Of course. We used eggs and cream grown right here on the farm.”
Her jaw nearly hit the floor.

Sugar beets grown in Chelsea’s garden were grated and dried to make these crisp, yet chewy cookies. The blueberries in the compote were locally sourced, and the lemon-lavender ice cream was made here from eggs and cream produced on the farm.

Everyone stayed to talk after the meal, to ask how the pork belly was prepared or to comment that they’d never imagined that fennel could taste so good. When the last guests had left after promising to reserve for the next three dinners and to give The Farmer’s Table a sparkling review on tripadvisor, the four of us shared a happy, laughing, bouncing hug, and then a glass of wine, which takes us back to the beginning of this post. If you are in Ohio, you will not regret a pilgrimage to Fox Hollow Farm to eat at Chelsea’s Farmer’s Table. Check out her website or facebook page to make reservations. 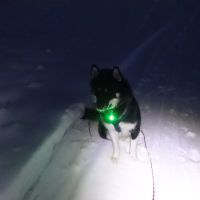