When it gets cold, here in Fairbanks, I can feel little jets of air shooting in through little gaps at floor level in the yurt. Like a hot tub, but not at all like a hot tub.

A secret: every fall, when the temperature bottoms out and I find myself stepping outside at night for the first time since the drop, I panic a little. Maybe it’s the sudden immersion in an illusion of the vacuum of space; that darkness in the stars, the empty, icy, weightlessness that threatens to suck the hot breath right out of my lungs and pull me apart. Maybe it’s all that heavy, icy air suddenly settling on me so that for a moment I feel like I can’t breathe under the lead of it, like the night air might force itself into my lungs and harden there. Can it be both at once? The terror of a crushing weight and the terror of weightlessness?

But then, every year, I pull on my Carhartt extremes and slip on my bunny boots. If you’ve never worn bunny boots, you might not know that they make for awkward walking. Each foot suddenly gets a lot heavier, and each step gets a swing to it, so that, like it or not, you’re walking around like an arrogant young cowboy with a brand new shootin’ iron. They say smiling sends happiness signals to your brain, so you can fake joy to make joy. Maybe it’s the same with confidence. Eventually, walking like that makes me feel at home in the dry, cold snow. Eventually, every year, the night and the ice and the starlight become my habitat.

Indoors, though, I wear fuzzy slippers almost all winter. No need to let the ice-jets sneaking in under the wall-cover tickle my toes.

and he shadows into the night with a bound.

I walk out of the dooryard.

My headlamp lights the path, the block.

I raise the axe and bring it down

Spruce snicks into the sugar snow.

And, as I straighten, I am stopped

Last winter, I stared into the eyes of a wolf

Just these eyes on a frozen night lake.

It looked its fill.

Stars prickle on the back of my neck.

my dog steps into the glow of my headlamp.

His eyes melt again to chocolate.

Inside, I let firewood clatter to the floor.

He steals a piece to gnaw

gets bits of bark on the rug.

A ctenophore the size of the sky just reached out of the stars and swallowed this planet I’m standing on! I’ve never seen purple in the aurora, or a whole sky of pale pink. I stretched my arms out and looked up, and from fingertip to fingertip, all I could see was frothing, billowing curtains of northern lights. My crappy pictures don’t begin to do it justice, but maybe they can feed your imagination a little. 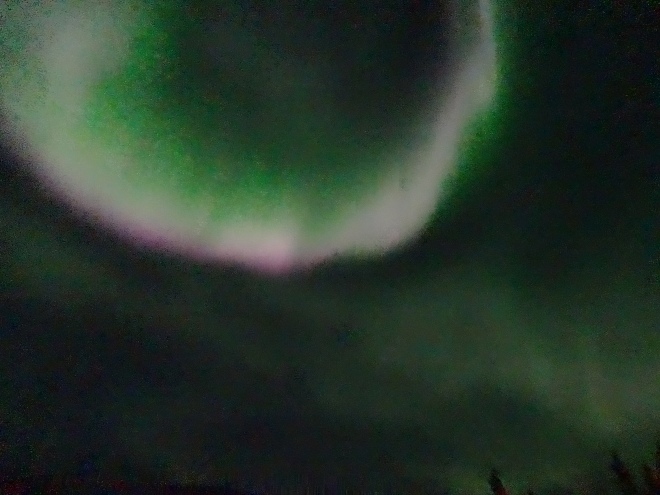 This was one of the most magical things I have ever seen. This rivals the Cataloochee fireflies and the dolphins making comets of themselves in the bioluminescent indian ocean. Nights like this swell my heart, blow the top off my imagination, and make my ribs resonate with the blast like a pipe organ.

A fairly typical scene from last week, before the snow fell.

Cosmically speaking, there are a lot of neat things going on these days. The aurora is supposed to be good on Thursday, which is exciting as it hasn’t been spectacular for a while. The equinox was a few days ago, launching fall in other places and winter here. Last, but not least, there is supposed to be an eclipse tonight. I am going to have to go out this evening to watch the eclipse. If last night’s moon is anything to judge by, it’s going to be pretty spectacular. The moon is supposed to be rising mid-eclipse, which could be really strange and special, but might be hard to see. Some thoughtful planning is in order. I wish I had access to some high ground. 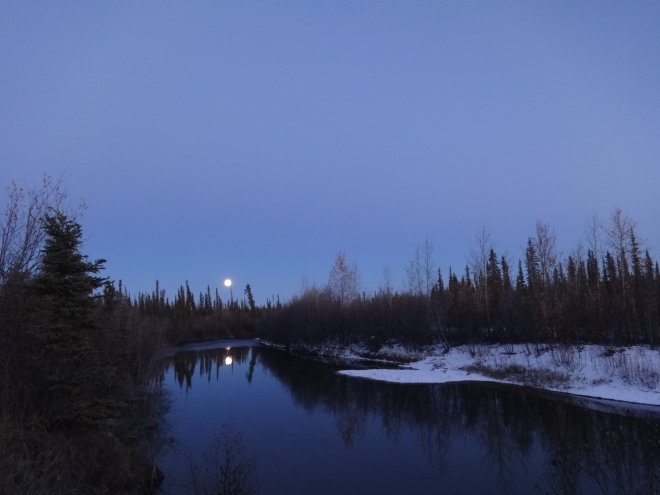 Last night’s moon over the slough.

Yesterday, Terri, Ben and I went for a hike out beyond the gravel bar on a quest for a view of the mountains. We never really got there, but we had a nice walk and a campfire dinner of baked potatoes and apples.

On the way out, a local guy on a four-wheeler stopped to talk and warned us about leaving the village without a gun. We were carrying bear spray and making plenty of noise, but folks here are very cautious about wildlife, and he hated to think of our needing a gun and not having one. We did see grizzly tracks and scat, and the bears are known to hang out by the gravel bar where the dog salmon are spawning now. 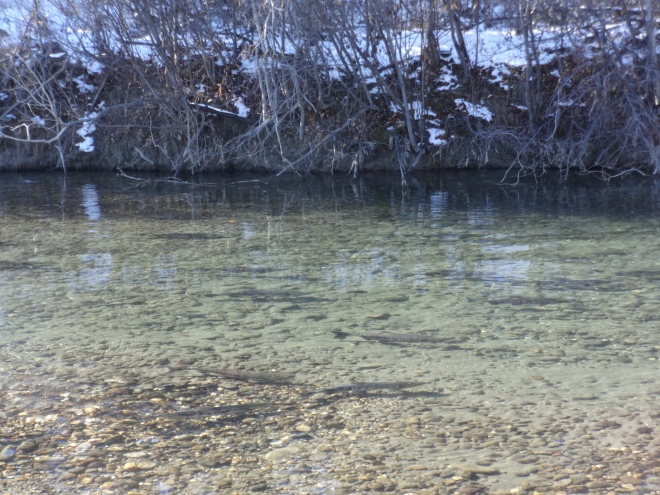 After our friend took off, we stopped by the gravel bar for tea and to watch the fish, which are huge and numerous. Apparently, a large portion of the world’s population of these salmon come back to our slough. They’re called dog salmon because folks around here use them for dog food. I let two kids out of school early the other day to take in nets and feed dogs. The fish are clearly tired out, sometimes rolling a little sideways in the current. They’re two feet long, and all muscle. They have to thrash a bit to get through the skinny water, and they sound like a herd of caribou splashing through the shallows. Sometimes you can see their dorsal fins sticking up out of the water, even when they’re completely still and silent. It’s totally strange. Our friend found us there, watching the salmon drift in the shallow water, and pressed a rifle on Ben, just in case.

The three of us walked a while beyond the gravel bar before we lit our fire. I wanted to hike to someplace new, and the weather was perfect: forty at least, with day-old snow on the ground and blue skies and sun. 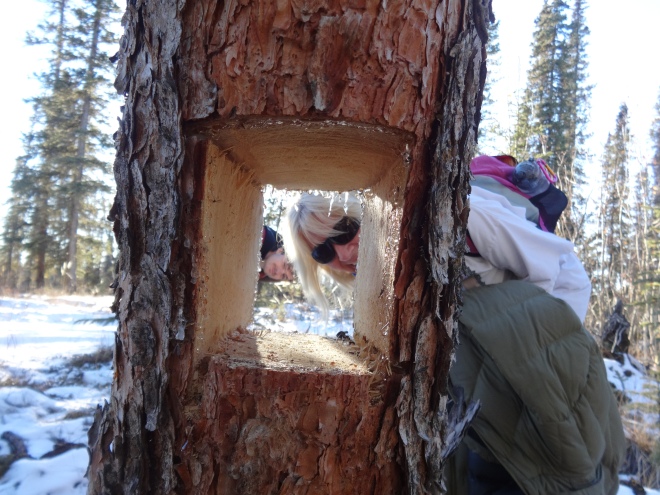 We found a hole in a tree

and the sky looked like a bomb pop all the way around, the east more pink and violet, the west more peach.

We wound up walking home in the dark, which I haven’t done before. I walk within the village after sunset often, but I haven’t ever been out beyond the firebreak after sundown before. It was new, and new was just what I wanted from my day yesterday.

Friday’s snow has stuck, the first to last more than a few hours. We’re due for more on Tuesday, so this may be it, folks. My kids begged me for a hike on Friday, and I gave in with pleasure. There’s something magical about walking in falling snow, and it’s not something to miss out on when the opportunity comes knocking. When we got back, I opened the classroom windows and we watched snowflakes blow in and dissolve on the carpet.

After school, I went out alone and followed fresh fox sign around a pond beside the old airport runway.

It’s the kind of thing that has to be done alone, a very personal pleasure. I walked out to the pond on purpose, knowing that there’s a fox that hangs around near there, thinking I might pick up his trail. After some bumbling around, I did, with deep satisfaction. The snow was only a few hours old, so I knew with certainty that the prints were fresh. I followed the fox’s tracks until they doubled back on themselves and I lost them under my own garbledy old boot prints. By that time, I was ready to move on to other things anyway, so I walked on up the runway. 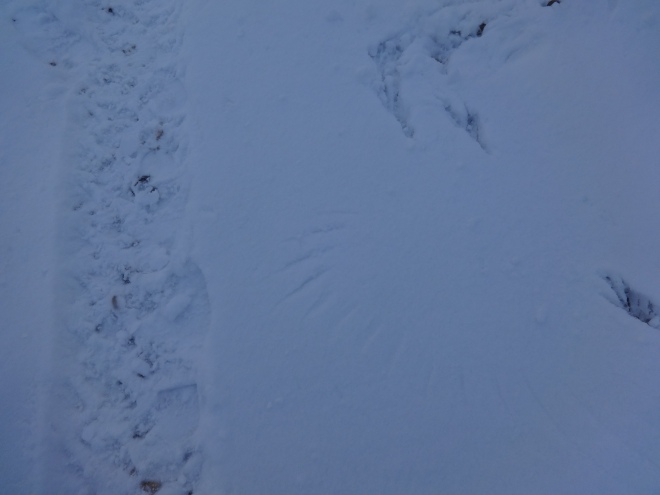 I love the way ravens’ wings make that whipping sound, a weighted rope swinging beside your ear. I like the way they leave wingprints in the snow. 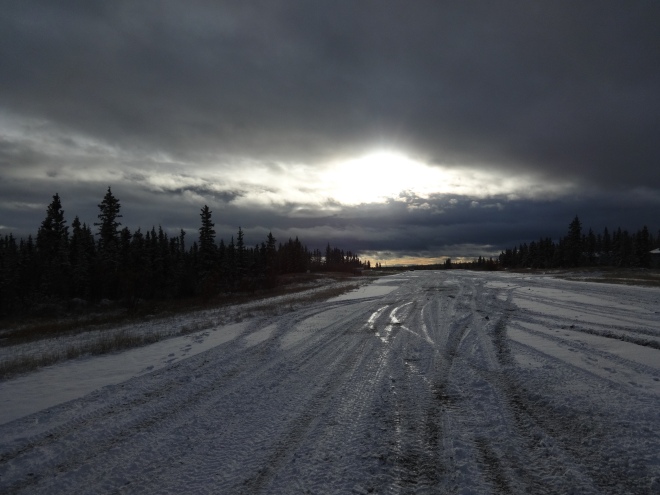 The snow is still so new. It’s a change in the landscape, for now, and I’m seeing it fresh. It’ll be with me a while, though, and after a while, I’m sure, it won’t seem so sparkling. Still.

I’ve been eating well, and walking out often. School is great and I’m mostly happy. I miss having friends around, but some of my favorite people have called me up lately to say hi, and that’s been awesome. If you tried me yesterday and I missed you, try again! I still can’t make outgoing calls, but I’m in touch with the phone company about it, and when their technician gets back from moose hunting, I think the issue will be resolved.

Gideon sent me a box of honeycrisps, which arrived just after school dismissed on Friday. I can’t wait to share them with the kids on Monday. The two who were still around when the box came in said (and I quote) “wow! How juicy!” and “I think… that is the best apple I have ever eaten.” They go crazy for fresh fruit, and really fresh really good fruit is unheard of. It’s freaking awesome.  Here’s a picture of apples in the snow: 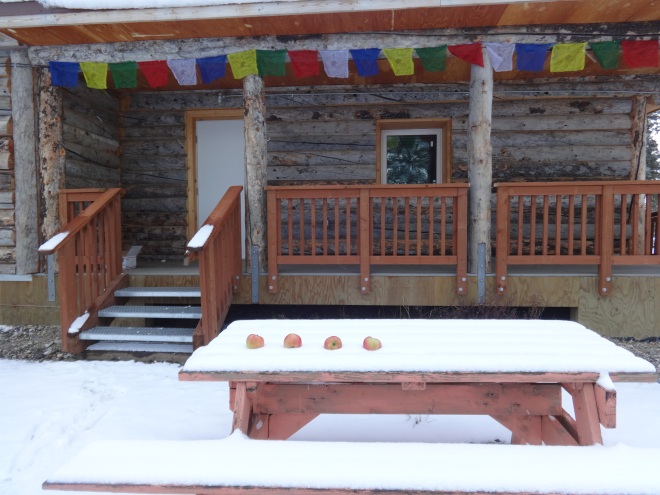 Today, Jake and Shannon are taking me out shooting, and I’m excited about it. If I’m going to be an Alaskan, I guess I should learn to be comfortable with firearms. Later, when there’s more snow, I’m going to learn about snowmachines. Terri and I are talking about going in on one together, and now that my boat’s sold I think I can commit to that. Why not? I’ll for sure be able to get out to the mountains if I’ve got ski power, and that could make all the difference.

Okay, this is shameless, but things are dire! We really need a teacher for grades 3-5. Things got screwy and the job didn’t get advertised, so we’re stopping the gap with a sub, and worrying about what will happen if we get stuck without a teacher and are forced to consolidate (it will suck. Let’s make sure it doesn’t happen). Here’s the job posting (finally) on ATP. The details are a little screwy, but the district is kinda like that. Things aren’t perfect here, administratively speaking, but for the most part, they leave us alone in our classrooms, and that’s something, anyhow.

The job, right now, is grades 3-5. There are maybe twelve kids in those grades, the bulk in fifth. The classroom is spacious, purple, outfitted with a smartboard, a sink, and big windows that look out onto the playground. There is an ipad for each student, and there are enough laptops available in the building for word processing projects. The internet is a little slow and occasionally unreliable, but you get used to it. Several of the students have IEPs. Special ed services are inconsistent here. You will probably have an aide.

Why you should come:

Why you should do it anyway:

Why not? It’s awesome. Challenges and opportunity go hand in hand: here, you have the chance to make your experience into whatever you want it to be, and that’s pretty unique.

Come teach with me!