I pulled on my cowboy boots yesterday for the first time in probably two years. The last time I distinctly remember wearing them was the End-of-School-Year Barbecue in Marianna, but I probably wore them a couple of times since then. For the last year or so, they have been collecting dust in storage. Then yesterday, I gave them a brief trial on my bike and decided they were suitable for a ride across the Charles to see Ian in Cambridge.

While I was riding, I thought about something my mom and Granddad would occasionally say, “You can take the man out of Texas, but you can’t take the Texas out of the man.” Aside from my family whom I love dearly, I have had a lot of negative associations with Texas. When I visit them we drive through the terrible urban sprawl of DFW; strip malls essentially line the highway the entire drive up North from the city to my Grandparent’s house, near the Oklahoma border.  I think about the hubris and “Everything’s bigger in Texas”, and the consumer culture. And, of course, all my favorite politicians are from Texas. “Don’t Mess with Texas.”

But walking around Cambridge and Harvard, I proudly sported my boots, smiling as they reminded me about my connection with the Lone Star State. There were all types of people from all over the world, taking pictures, touching John Harvard’s gold shoe, but I was the only one in boots.

Still having the Texas in me, I now believe, means taking pride in what makes me unique. It means taking on big projects, big ideas, and actually doing something, not just talking. When I got back to Ian’s apartment, it was a physical struggle to take the boots off. On each baby toe, there was a huge blister. 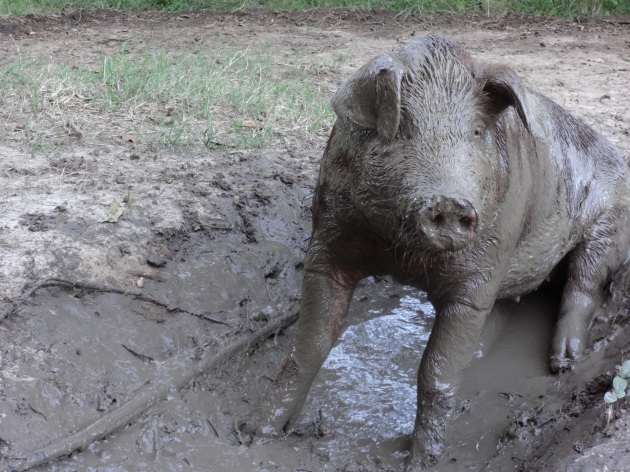 According to Levi and Sizzy (who escaped today, to no one’s surprise and everyone’s exasperation) you haven’t known true happiness until you’ve done this.

We spent the weekend in Texas with Sean’s family.

We came home and had a Wednesday cookout at the lake.

There was even some paddling, (not the kind we have in schools), and a swim and float with eyes full of the cottonball sky.

Our meat chicks arrived today, and, after spending the day at school with Mr. P, immediately soaked themselves in their water and began to shiver. We don’t have a hair dryer (they’re not environmentally friendly or useful to people with little hair) so we toweled them off as best we could and stuck them under the lamp.

They’re all fluffy again, and adorable. No sign of spraddle or gunkybutts yet. These birds are destined for plates all over the scintillating metropolis of Marianna, AR. We ordered extras so we could sell to our friends, and people seem into it!

Boople and I adored them from afar. Neither of our cats has ever posed a threat to our chicks, but we’ll leave the little critters in the spare room with the door shut, just in case.

Really though, who could believe this cutie is a seasoned killer?