On that Saturday, we left Zhoh Camp late in the morning. Leaving camp in cold weather is always hard. Getting up is the worst part, because it’s cold, even in the tent, until someone starts a fire. I don’t usually budge from my sleeping bag unless the cold tickles my toes in earnest.

Once the fire is stoked, the chores begin: Geoff always makes coffee first, usually enough to fill the thermos. I don’t drink coffee, so I sometimes get to luxuriate in my sleeping bag while he builds a fire. After coffee is made, someone has to heat snow to fill the water bottles, which is more time-consuming than you might think. The dog-bowl has to thaw out. Breakfast has to be made and eaten (a hot breakfast makes a difference on a cold day); damp gear has to be dried (after a day out, my boots usually have a film of ice in the toes under the liners, so I have to thaw them out before I put them back on – in the tent I can do this overnight); fuel has to be siphoned,mixed and poured; and the gear we haul with us (“Beverly Hillbillies!” someone once commented upon seeing our sled) has to be tied down.

We did get out, eventually, and we thought we might make Venetie in the wee hours of the morning. The rumor mill had told of trail at Bob Lake, twenty miles away, and we’d already broken the first five. Fifteen miles of trail breaking was a lot, but it wasn’t unthinkable for a day’s work, and once we reached the trail it was fifty miles: just another long dark haul through the night, and we’re no stranger to those.

Trail breaking is hard work in ideal conditions, and Geoff had to haul the sled and carry me and the dog on the back of the machine. Usually, that meant leaving us behind while he broke trail through new territory, then turning around to pick us up, so he was running the trail three times. The section right after the tent is the trickiest part of the hundred mile stretch. The cat trail disappears for a while, and you have to cut your own path.

We crossed a blinding expanse of tundra with Brown Grass Mountain in the distance. “It looks like the Lonely Mountain,” said Geoff. Nerd.

At the end of the tundra, we began a long climb. The whole valley rolled away behind us, and I felt untethered and giddy as I always do when I watch the familiar fall below the horizon.

When evening rolled over us, we had just found the cat trail again. Looking for it is like driving by a field of corn and waiting for the moment when the sea of green suddenly stands up in straight rows. You’re looking at forest – a wall of black spruce, and then suddenly, if you catch it at just the right angle, it parts and there’s this long, narrow hallway through the trees. 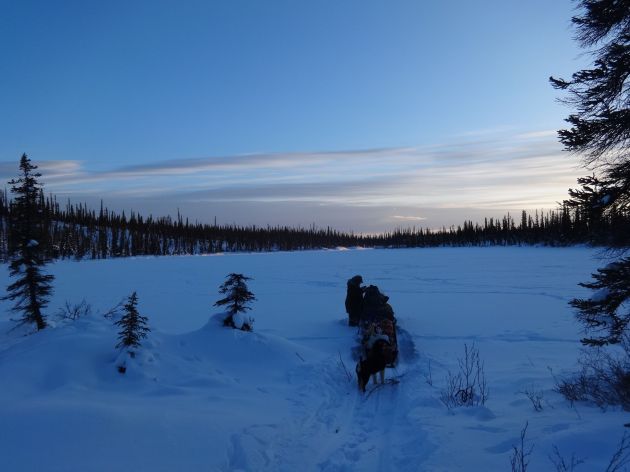 A break just before we found the cat trail again

Dark fell as we were nearing the top of the ridge.

“Let’s take a break here,” Geoff said, and began untying the chainsaw. “We’ll get a fire going, then I’ll go break trail to the top the ridge and come back for you and the little guy. It shouldn’t take me more than an hour or two to get up there.” I began knocking down small dead trees and pulling dry, brushy branches from the lower parts of the large spruces. “After the ridge, it should be smooth sailing to Bob Lake, and then there’s trail to Venetie. We could get in early in the morning if we push through.” We lit a fire in a flat spot beside the trail.

Night closed in as I limbed the trees Geoff cut, and suddenly I was sobbing. The wolf, the cold, the inscrutable night beyond the firelight: It was too much, and it pressed out on my insides so that my breath came short and my eyes filled.

In the dark and cold, behind all those layers, it’s easy to hide some tears so I held myself quiet and still. I didn’t want to make a fuss, knew in my head that we would be fine, that a few hours wasn’t too much to ask, although my gut shivered.

“I’ll leave you plenty of wood, the chainsaw. You’ve got your bear spray, the axe. You can take the pistol if you want.”

Geoff sawed lengths of wood. I stacked them.

“Are you okay?” Geoff asked. He had noticed my silence or perhaps that my eyes were shifting away from his, not from the glare of his headlamp.

“I’m not sure I want the pistol. I’d be too scared to fire it,” I deflected.

“Well, you can have the flares. That’d send the big bad wolf packin’.” He began rummaging in the crate on the back of the snowmachine.

After a while Geoff came back to warm his hands by the fire, “I can’t seem to find them. I’ll keep digging in a sec.” His gloves steamed.

The firelight flickered on our faces and he got a good look at me.

“Keely? Are you crying? What’s wrong?” He opened his arms and I crossed the fire pit and pressed my cheek against his jacket.

“I’m scared” I said. “I don’t want to slow us down or ruin the trip, but I’m scared of being alone out here.”

“I don’t have to go.” He said simply, and I felt my belly turn from ice to jelly.  “Let’s get everything set up. We can stay here tonight, or, if you feel up to it later, you and Daazhraii can hang out in the sleeping bag by the fire with a nice stack of wood and a killer arsenal while I go break trail. Don’t worry about it.”

I gathered soft tips from the spruce trees while Geoff made dinner, and made a bed of them beside the fire. We laid out the tarp, the sleeping pads and the sleeping bags. I ate quickly and fell asleep almost instantly with my headlamp on and my book in the sleeping bag with me. Geoff brooded a while by the fire, and I woke up long enough to put the headlamp and book aside when he crawled in beside me.

“thirty-five below” he said.

We pulled the puppy close beside us and Geoff draped his parka over the little guy. Daazhraii’s breath steamed in the night air, and he curled his paws tightly under his belly.

Traa camp in the morning