I hung out in my hammock tonight. Before you ask, I don’t know the temperature, and it doesn’t really matter: when I ski, no matter how cold it is, I usually have to stuff my gloves into my hoodie and go bare-handed to keep from sweating. When I got back tonight, I thought, why not? and hung the hammock out for the first time since September.

I had the realization while I was flying, double-poling, down the Old Airport, that skiing won’t always be an option. Maybe it was this balmy, some-degrees-above-zero night that brought it home for me: Summer will come, and I’ll have to hang up my gear until snow hits again. The sandals and hiking shoes will come out from behind the pile of winter toys, and I’ll have to figure out how to entertain myself on a ground made of dirt instead of snow and ice. It’s so weird, in the spring, when the kids start wearing shorts and I see their knees for the first time. It feels indecent after snowpants in gym class.

I’ve completely fallen in love with skiing this winter. I know I’ve written a lot about it, and I’m sure it’s tiresome for most of y’all, but it really is awesome. After giving up on crossing the slough (it was all overflow, which is absolutely unlike last year, when it was solid all winter) Ben and I explored an old burn just north of the village last night, and I broke trail through this brushy undergrowth, hooking my skis under every fallen limb and punching my poles into the deep snow, nearly toppling off balance with every unexpectedly deep punch, but the sky turned an outrageous tortoiseshell purple, and my chilly cheeks burned from smiling waaay more than my legs burned from plowing all that knee-deep snow. I pinched a bud on one of those wonderful, pungent trees that grow in the wet areas in the flats and it released that green ginger smell into the evening air.

Tonight’s outing was just about flying in the full, cloudy dark for a few minutes, (I like the way my skis rattle on the ice when I’m really moving and I can’t see a damn thing) and coming home with a pumping heart and some endorphins tickling my brainpan. It just feels so good. 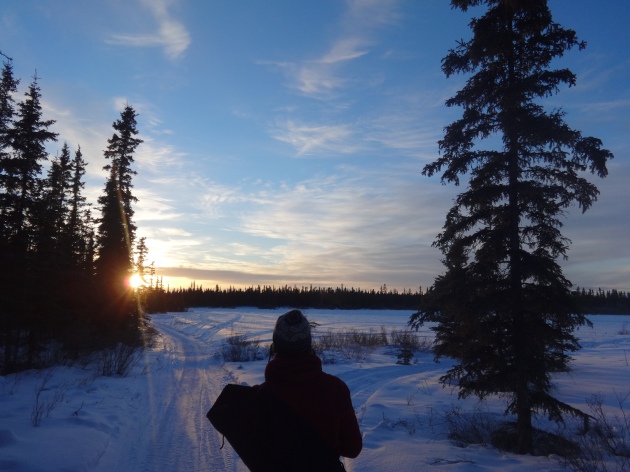 I’m not ready to let go of this yet. Jake’s asked me to start harnessing Angel when I go skiing, and to let her run with me so that eventually we can try skijoring. I’m super psyched. I don’t know anything about skijoring or dogs at all, but it’ll be fun to figure it out, and it’ll give me something new to do on the weekends. I want this part of winter to last and last, and it’s a funny thing to think how much I’ll truly miss the snow and ice when it’s gone. 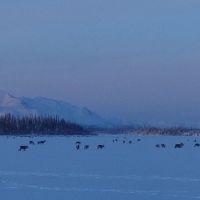