I have never lived alone before, unless you count my cupboard on Angelique or the tent I camped out in, in high school. I’ve always had a family or a roommate or a live-in boyfriend. Always.

I like having two plates and two cups in the cupboard and keeping them always clean, and waking up in the morning with my mug already on the stove, waiting for tea, right where I left it when I did last night’s dishes.

I like coming and going as I please and bending my plans to please only me.

Is it selfish that I like that nothing is shared? I like the freedom of carrying my own supplies and going places on my own power.

It’s shocking and liberating, being suddenly free of those perceptions. I feel like part of me just stepped out of a shadow and shook off a heavy pack that I didn’t know I was wearing, and now I’m featherlight and running. I feel fearsome. Noticed and heard.

I’ve felt this way before when I’ve had a long-distance love. Confident, laughing out loud, spotlit, brazen in full breath, and supported.
Like the man in the phrase “behind every great man there’s a great woman”
Like I’m suddenly standing in front.
Like I’m taking risks and looking really cool and feeling really giddy, and nobody knows I have a secret safety net.

Maybe I like having all the privileges of independence with none of the risks.
If things go wrong, my other life is waiting there in the wings. I could go back to Arkansas and pick it up where I left off and little would have changed, but I don’t want that. I’m too young to be a pseudopod on a family amoeba, and I’m too old to make excuses.

I want this. I want to carry my own independence.

Sean and I made the decision to reevaluate our situation in November because I realized that I wasn’t happy. I was crushed in the commitments and obligations of our partnership, not made greater and freer by its support. I think now that that’s in part due to the way the world perceives and acts on women in relationships.

I wanted my own identity. He wanted me to have it.

We talked about it a lot and decided that we are strong and trusting and honest enough to shuck conventional relationship rules, to live independently, and to tackle challenges as they come up. I have a great person standing, not behind, but beside me, and it’s friggin’ awesome.

Someday, I will live in a world where I can stand beside a man and not disappear. Until then, I’m standing alone in full arctic sun, working on growing strong enough to glow blister-bright in any shadow.

It’s a little scary that there’s not an end-date on this arrangement. Sean doesn’t want to live in Alaska, and I’m not planning to leave until I’m ready to go joyfully into a new adventure of my own choosing. There’s not a clock ticking down to a conventional future for us.

That’s okay. That’s kind of the point. Maybe in about a hundred years I’ll be ready to build the rest of my life with someone, but right now, I just want to live the life I want when I’m not compromising. Sean’s with me, and his support is making me greater and freer. 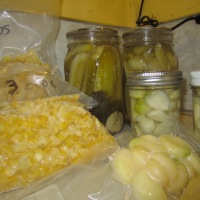 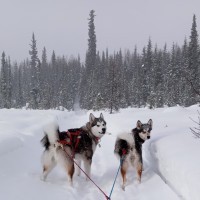 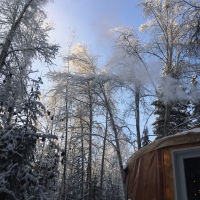