Last night I got into bed, all ready to have an early night. Sean was just about to climb in with me, but he heard something out front.

“Chunky’s on the porch. I’m going for it”
“If you get him, what are you gonna do with him?”
“he’ll be too blown apart. I’ll just throw him away. It’d be a different story if we could get any .22 bullets.”

From bed, I heard that shotgun noise (ch-chk), then a while later, BOOM. Sean came back inside.

“It was a clean kill. I kinda feel like I should do something with it”
“But you said —”
“I’d feel bad”
“okay. Let me get dressed”

five minutes later I was kneeling on a tarp in the middle of my kitchen floor, helping Sean process a raccoon. The entry wound was small, just the size of a quarter. The sternum was shattered and the lungs were full of shot. Chunky didn’t suffer, and most of the meat and fur was in good condition.

I’ll be honest. Sean and I are amateurs when it comes to this stuff. I’m sure any of my students could have gutted and skinned this thing faster than we did, but we’re learning, and at least we have the gumption to try.

Sean froze the head separately for me. When I get home tonight, I’m going to thaw out the hide and scrape it, then wash it and tack it to a board to dry. When it’s dry, I’ll try my hand at brain-tanning. If all goes well, I’m going to try to make Chunky into a hat. We messed up the tail a little, but it’s a first try, and skinning a tail isn’t easy. The head skinned out nicely though.

Raccoon is edible, though my students don’t recommend eating it in the summer. I need to do more homework on that subject before I make a decision. Right now, I don’t know whether we’ll eat it. If we don’t, it’ll go to the chickens, circle-of-life-style. We don’t kill for sport, but to control pests, and we try to make sure that every part is used somehow. We even saved the Arkansas toothpick. 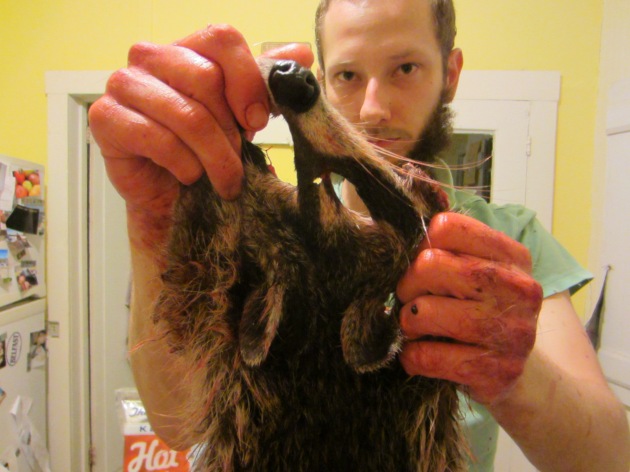 One thought on “My New Hat”