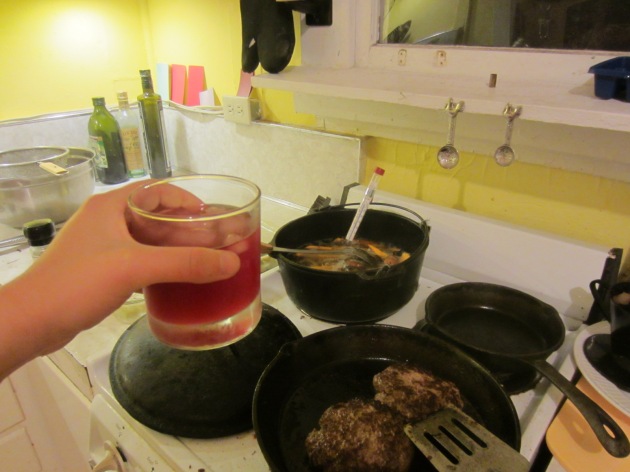 dinner at 11:00 and a cranberry margarita, thank you very much.

We went to Memphis today to pick up groceries, feed and maybe a canoe. As we stepped out the door, dressed in our raincoats and dreading the deluge, our three little pigs greeted us cheerfully from the driveway. 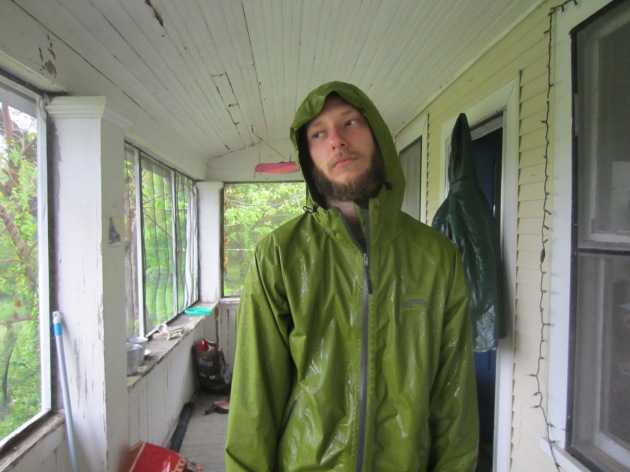 We chased them back into their pasture with the full understanding that they have completely lost their fear of the electric fence. We knew they’d get out again, but we had to go.

Memphis was nice. We didn’t get the canoe, but we got a sweet new grill, fencing for the gardens, lots of pig feed and some needed staples at Whole Foods (staples = bagels, chocolate, cranberry juice and baguettes). We hurried home so that we could unload the truck and get to Helena in time to watch Game of Thrones with some friends. When we got home, the pigs were gone. They were nowhere to be found, but they had left clues.

Pig damage in the garden. They must be stopped!

After searching for a while we came in and made some calls, cancelling our plans and asking friends for backup. While I was on the phone, we spotted the swine trotting through the yard. Sean and I cornered them in their house and managed to tackle Daisy. 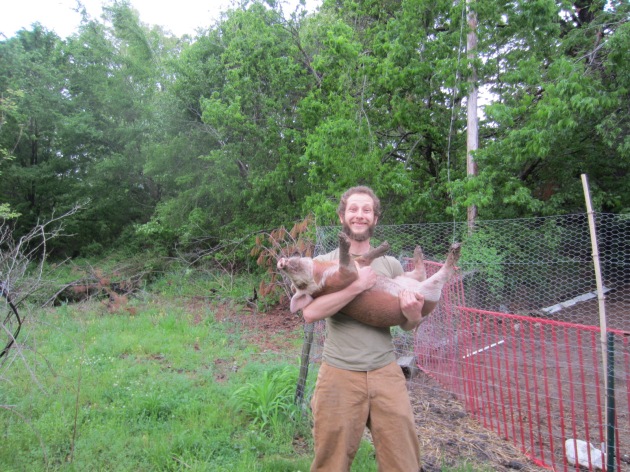 The first one was easy. She brayed horribly in Sean’s arms, but his triumph was unquenched.

We stashed her in the chicken yard. About ten minutes later, we caught the next one. Sizzle bashed her head into the chicken gate when we herded her in, but she’s fine now. That left Levi, and Levi didn’t want to be caught. Ian showed up after a while, and the three of us chased her all over these hills. At one point, the boys had her cornered in a hollow tree (!) but she escaped them.

When it got dark, we lost track of her. All we had for light was Ian’s phone, and he needed to get home, so we nearly gave up. I knew I wouldn’t sleep well without knowing Levi was in her pen with her sisters, so we cruised down to our neighbor’s place to borrow a flashlight. While we were there, our car crapped out. No joke. Byron is a saint and (of course) he helped Sean fix it. All it needed was a little battery scraping.

Levi wasn’t in her old pasture. She wasn’t visiting her sisters. She wasn’t in the yard anywhere. We found her asleep in her hollow tree and Sean snagged her.

My sweetheart is the ultimate Porkemon Master: he caught ’em all.